Ankle reconstruction and my new screw!

Last Friday I had surgery on my ankle. I knew that I had ruptured a number of ligaments in my ankle, but the real damage was found when they got inside. I had ruptured my sydesmosis...this meant that my tibia and filbular were no longer connected to each other at the ankle. I had a tear in another ligament as well and they decided an ankle reconstruction was appropriate. He put a large 45mm screw through my fibular and tibia for stabilisation. In addition to this they put a tightrope acnhor through and reattached my ligaments.
The screw will be removed in a few months time, and the tightrope will remain to ensure it doesn't happen again and to ensure it fully heals. I am really struggling to keep myself entertained, but I hope to be off my crutches in 5 weeks and can't wait to get walking and functioning again. I see the suregon again on April 5th. In the mean time I am hoping to get started on the Smart Connection Diploma of Management and put all this spare time to good use.
You will get an idea of the crash from the photo below, but If you want to see the video of my crash in Alpe D'Huez that led to all of this, you can see it online at youtube under Sarah Sauvey ski cross crash Alpe D'Huez 2011. Be in touch soon! 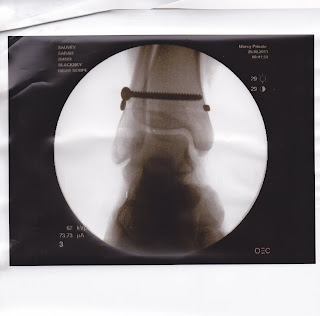 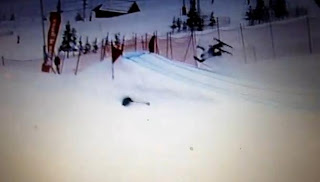 Posted by Sarah Sauvey at 10:58 PM No comments:

Last night we had the Eastern Division Leader Newspaper awards for 2010 held at Etihad Stadium. I was awarded the Progress Leaser Senior Sports Star of the year for 2010. I received a medal and was interviewed on stage by Steve Quatermaine (AKA. Sports Tonight man as seen below). I also received a voucher for Rebel Sport. I was very appreciative that my hard work has been recognised by the local community. I was on the front page of the Leader Newspaper this week with the winners of the Junior division and the Encouragement award. I am going in for surgery on Friday 25th Feb and will let you know the full damage and operation report after. 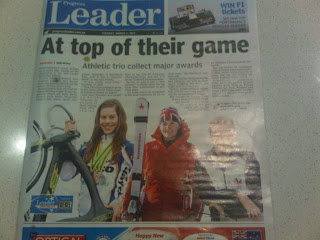 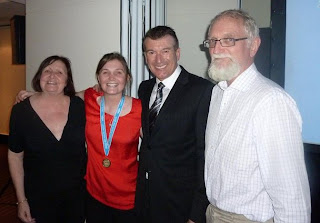 Posted by Sarah Sauvey at 10:43 PM No comments:

I have returned home to nice warm weather and sunshine, but unfortunately it turns out I have managed to rupture at least 2 ligaments in my ankle. Imaging (ultrasound, x-ray and MRI) have shown that the anterior inferior tibio fibular ligament is ruptured and they suspect the posterior ligament has as well. Thus my tibia and fibular are currently not attached together.

They also suspect I have torn another ligament in there as well and potentially pulled a small piece of bone off. Therefore, on the 25th February I will be admitted to hospital for an ankle reconstruction. I am hoping they don't have to screw the bones back together, but the full damage won't be known until they get in there. Hopefully it will be quite simple and all heal up nice and quickly. I will keep you posted on my progress.
Posted by Sarah Sauvey at 7:46 PM No comments:

21st at World Champs and beyond! 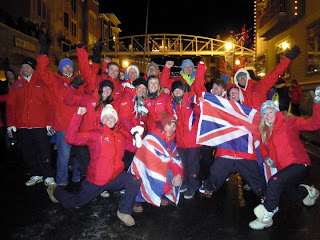 The World Championships were held in Deer Valley/Park City, Utah, USA. I have to admit, the World Champs didn't really feel like World Champs. It was my 3rd World Championships, and I have to say, I think it had the least atmosphere. I was in quite a lot of pain and was only capable of doing 1 training run on both days. I have a HUGE thank you so say to a few people:
1. Mer Bennett - my buddy and fan from Tahoe who travelled all the way from Reno by herself to come and support me and cheer me on! It was so awesome!
2. Andy Dennis and Ed Holmes, who came all the way from Melbourne, AUS to come and support and help me out!
The support was really appreciated. It was awesome to see Amalie and Oli come up and support me as well! He is always a good attendee :) 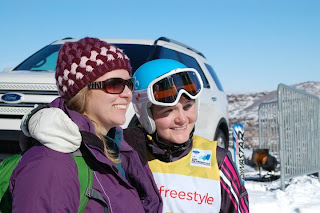 Unfortunately I made a mistake in my quali, and had a slow time. But they took all ladies for finals as the field was much smaller than normal, and I got a chance to race SX! I had a tough heat with Fanny Smith and Jenny Owens, and on final day, once again the leg really only held up for one training run. Then in the heat, I had a pretty good start, held a good line and managed to make a pass on Jenny, stoked with the result I then followed behind Fanny rather than taking a strategic line and was passed once again by Jenny further down the course. It was nice to make a pass and feel the first spark I have felt from the sport in the last 12 months! So I finished up at the World Championships in 21st place. Not a bad result for ultimately trying to ski on one leg. 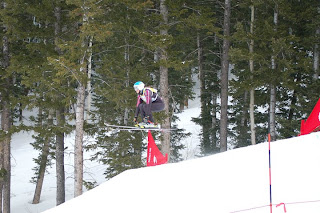 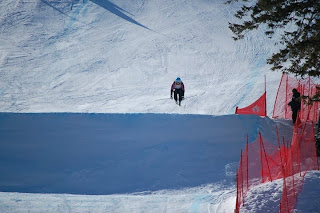 I decided to continue on my itinerary and see how I felt in Blue Mountain at the next WC. I knew I was heading home after it, so I thought I would see how I felt. In the training in Blue, I felt like I was skiing at about 60%. After trying to compensate by using my left "good" leg, I now had a lot of pain in that leg too. My head was saying go, but my body was saying no! So I decided not to start the event, as I wasn't going to qualify skiing like this, and I was sitting back, so I was scared I may end up injuring myself worse. It is never an easy decision not to start a comp, when you have travelled so far to get there. But this is ski cross! So now I am waiting at LAX airport for my flight home for some much needed rest! I will write again soon. All the best!
Posted by Sarah Sauvey at 7:54 PM No comments:

Alpe D'Huez and 17 new stitches in my face!

It has been a long time since I wrote. I feel like I have not stopped in weeks. I had an accident in Alpe D'Huez at the World Cup on the 11th January. I caught my ski edge coming into the final jump in qualification and found myself doing my first rodeo flip, which I certainly didn't land. Rather, crumpled in a heap on the flat. I had a pretty good black eye, a really swollen cheek, and 17 new stitches in my face, but to be honest, this looked pretty savage, but didn't hurt that much. Unfortunately I smashed my right knee up and strecthed the ligaments in my ankle...these both hurt a lot!
I took a week off and was hoping it would all clear up and I could get back on skis. Huge thank you to Sarah Verlaan for having me to stay for so long in Zurich! My leg wasn't get any better and something certainly didn't feel right, although i did have stability in the knee. So I decided to go to a sports doctor in Zurich and get a professional opinion, so I don't go and make something small into something big. The doctor suspected torn meniscus and stretched ligaments and sent me off for an MRI. After 12 days off, finally I got the results back and I was fortunate enough to escape with only "extensive bone bruising" and the stretched ankle ligament. So off I trotted to Grasgehren Germany on my own to get back into SX!


I arrived in Germany totally alone. No Team mates, no coach, no support. I strapped up my ankle to the best of my ability and I stood in the starting gate honestly, scared stiff! My arms were shaking, legs, and all I could think was...please don't hit the back side of that large double! Infact I don't recall being that frightened in the last 2 years. I basically would land a jump then try to ski on one leg, I went there with only one aim, and that was to forget the crash and go to World Championships with a fresh head, even if he body wasn't fresh. So I successfully completed the competition, a huge thanks to the Swiss team for letting me use their tuning bench, I was slowand in pain, but the good news was I was off to World Champs no longer thinking about my crash in France. 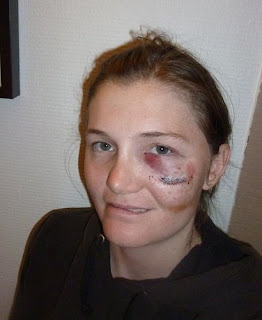 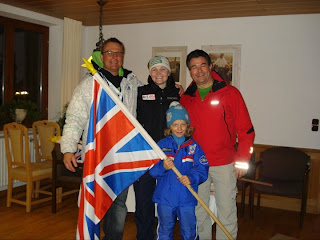 Posted by Sarah Sauvey at 6:16 PM No comments: