I write from Brooklyn, New York where we have spent the last few days at a hostel, running around seeing the city! I woke this morning to an official letter confirming that I HAVE BEEN SELECTED TO REPRESENT GREAT BRITAIN AT THE 2010 WINTER OLYMPICS IN SKI CROSS!!!!!!!!!!!!! Wow! After this long journey and the chaos that has unfolded along the way, I am so stoked that the perseverance has paid off!!! I now fly to Calgary on the 29th January to the British Olympic Holding camp for all sports. The opening ceremony is on the 12th Feb and Ladies Ski Cross is on the 23rd Feb! I will be in touch soon. Please find a few personal favourites from our trip to NYC below :) 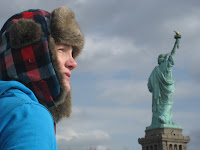 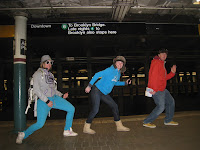 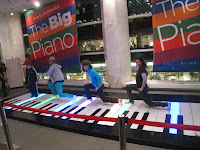 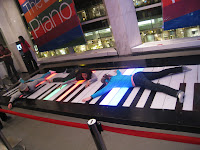 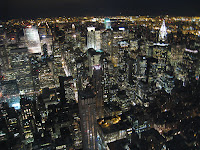 Posted by Sarah Sauvey at 10:05 AM No comments:

The course in Blue Mountain was quite flat, and open, it was a gliding sort of course up the top. It ran quite well on the training day however, once qualification came along, of course we got a massive snow storm mid race. The first girls had a pretty slick icy course. After the snow storm set in, and started absolutely pelting down large flakes, We had a course hold at bib 23, Noriko got flagged and came around for another re run, she slotted in just before us. They had a course hold after bib 29 by which time 2 inches of fresh snow had come down. The race was basically over, we had no chance, we had powder on the track and bad visibility and no one managed to be competitive after that. It was a bit disappointing but managed to qualify in 30th place atleast for finals. We went out the next day to improved weather and the course was in nice condition. I had a very tough heat, Ophelie David (FRA), Marte Gjefson (NOR) - the eventual winner and Aleisha Cline (CAN). I had a decent start but from the outside it was difficult to get across, then we stood on eachothers skis around the first corner, by the time I moved myself off Aleisha's skis, I felt like everyone took off, so I did my best to follow and catch up, but it wasn't a terribly exciting heat. It was great experience and awesome to get some more training in heats. Off to Lake Placid now for the final World Cup prior to the Olympics. I'll be in touch from Placid. Adios! 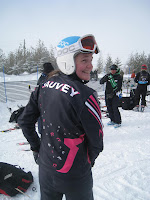 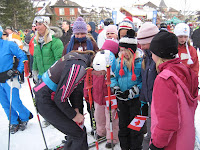 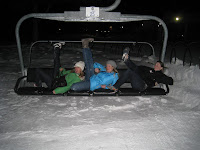 Posted by Sarah Sauvey at 7:50 PM No comments:

Just a quick note of good news! Today I received confirmation from my governing body that I have been nominated to represent GB in Vancouver once the IOC quota spot becomes available on the 25th January. Now I just have to wait till the 26th to confirm GB receives a spot. Very exciting news!!! Hard work is paying off and the stress is settling!!! More from Blue Mountain soon! 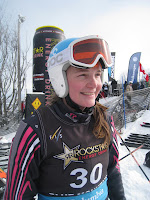 Posted by Sarah Sauvey at 7:32 PM No comments:

We have just finished up the final Olympic qualification event in Alpe D'Huez France. Fortunately I skied well. It was a great course, with quite a lot of features. I skied well in training and then managed to take a great line in my qualification run finally qualifying for the finals in 27th position. The good news was, we got presented with our bibs at a big presentation in town and I managed to squeeze in a lunge whilst collecting mine!!! (see photos below!) Unfortunately, due to a huge snowfall, the course was deemed too dangerous the following day for finals and they cancelled them and fell back on the qualification result. I was soo excited to finally make the finals and have a chance to better my result, but 27th is still a top result. Stoked! This moved my position on the World Ranking List upward, making my chances of Olympic qualification more promising. We were travelling from Alpe D'Huez back to Peissey for the night, before driving the 12 hours back to the UK, when driving along the highway the back suspension fell off the Vectra and Gus thought the back wheel had fallen off. Fortunately everyone was fine, but the stress levels were elevated that's for sure! Insurance managed to fly me to the UK so I could connect onto my flight to Toronto for the next World Cup in Blue Mountain, Cannada. Only problem was that they have valued my car at too little to tow it back to the UK and said the repair was worth more than the car, so my car is still in France, with the back of the car lying on the tyres!! Just another thing to deal with at a later stage. My focus right now is the next races and ensuring my selection for the Olympics. 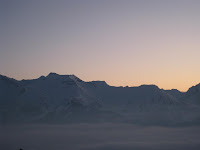 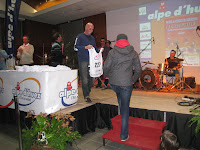 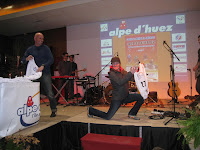 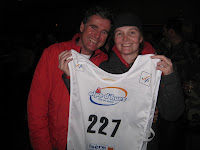 Posted by Sarah Sauvey at 7:02 PM No comments:

After spending christmas and new years in Spain with Chio and her family and driving across to Portugal and being denied a passport stamp!!! We had a night in Munich at Sabine's before heading to St Johann in Tirol, and yet again, it lived up to its name St Injection. They had brought their injecting machine across from Kitzbuhel once again and injected the hill a few times. It was see through ice and the course was slightly longer than last year. The training day saw quite a few injuries. I had a decent run in qualification making one vital mistake onto the flat, losing speed but finishing in 34th position. I was disappointed as I missed out on qualifying by only 0.15sec. Anna Woerner of Germany was the last to qualify in 32nd and she went on to gain 4th in the finals. This was at least promising. There were A LOT of injuries due to the injected hill and the nature of the course, but it was a night event and had a great environment and was a great spectacle. We travelled across to France the following day to Les Contamines for the following world cup. My training went well, but I just froze up in qualification and just had a shocker. That is 5 times I have competed in Contamines and I am yet to have a decent result there. I am determined to change that next year. Looking forward to Alpe D'Huez, the last of the qualification events for Olympic Games. I will be in touch! 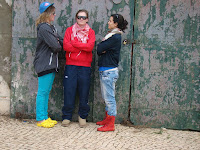 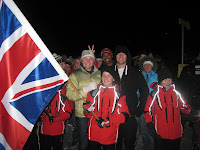 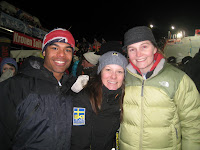 Posted by Sarah Sauvey at 6:35 PM No comments: